Is someone there called Martin?Martins Wood Farm is an established small-holding surrounded by the idyllic Sussex countryside, in its own woodland setting, and is run by the Barker family. Jon and Lesley first got into the addictive hobby of chicken keeping when they had a few back garden hens which they shared with their neighbours in St. Paul's Walden, Hertfordshire in 1974. They began with half a dozen assorted ladies and a large, handsome cockerel called Idi.

They moved to Maresfield, East Sussex in 1985 where together with their three children, they worked a busy mixed farm. As their enthusiasm for chickens grew, so did the number of hens they had. The main concern was 5,500 free range hens whose eggs were distributed throughout Sussex and Kent. All the children were involved in farm life, but their youngest son, Tim, became a full time member of the family business.

The most recent venture for the Barkers has been Martins Wood Farm, Ripe, which they took over in March 2011. After 115 combined years of experience with our feathered friends they are now, together with Tim and his wife Paula who live at the farm, introducing families to the delights of looking after hens and collecting their own fresh eggs every day.

So no, there is no one here called Martin! 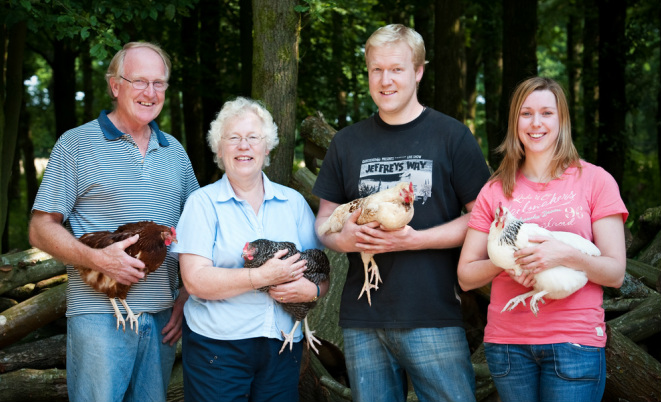 Say CHEESE! Jon and Lesley with their son Tim and daughter in law Paula!